Swimming for Fitness and Health

Swimming, the closest thing to a perfect sport

Swimming gives your body a great workout without the harsh impact of land-based exercises. It exercises most of the major muscle groups in your body. It’s inexpensive, fun, and safe for all ages. It’s also a gentle way to improve your level of fitness. Whether you’re a seasoned athlete or someone in desperate need of exercise, swimming can help you! In this booklet, we’ll dive into 8 benefits of swimming and aquatic fitness.

One of the reasons that swimming is so beneficial is that the impact to your bones and muscles is significantly less in the water as opposed to on land. If you submerge your body just to the waist, your body bears only 50% of your weight. Sink to your neck and the water will bear up to 90% of your weight. The buoyancy of the water allows for easier movement. The water also provides the resistance needed for a proper exercise effect. If you have muscles and joints that are stiff and sore or if you are overweight and suffer from arthritis, swimming is the perfect place to start your workout routine.

The Arthritis Foundation suggests that stretching and strengthening muscles in a pool brings on quick pain relief. Swimming in a heated pool will help arthritis sufferers reduce their pain and loosen up tight and stiff joints. 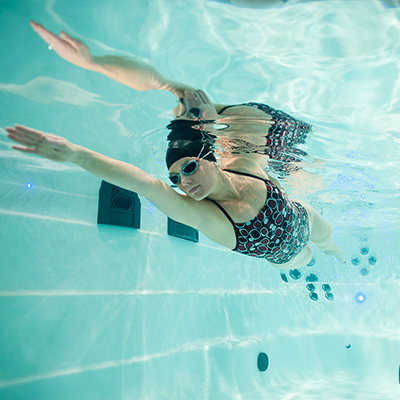 Swimming is a great exercise to help reduce stress. As you swim laps, you are also gaining the advantage of releasing beneficial chemicals throughout your body. These endorphins not only help reduce levels of stress and frustration but they also help with the reduction of pain. You can relax and feel good at the same time. Swimming brings on the relaxation response that is similarly found in a yoga class. The constant stretching and relaxing of muscles combined with rhythmic deep breaths is the key. The splash of the water can act as a chant and drown out distractions.

Not only does stress weaken your immune system, but stress can also weaken your brain. Swimming can help change your brain for the better by something called hippocampal neurogenesis – the growth of new brain cells in a part of the brain that is weakened by chronic stress. Participating in stress-relieving swimming can help to build stronger brain cells.

New international research commissioned by Speedo2 has revealed that swimmers agree that swimming helps to release stress and tension, makes them more confident about the way they look, and leaves them mentally refreshed.

In this same study, leading research specialists Ipsos MORI examined the psychological benefits of regular swimming. The results revealed that getting in the pool is the perfect way to unwind after a busy day with 74% of those surveyed agreeing that swimming helps release stress and tension. Results also revealed that swimming is the ideal ‘feel good’ exercise with 68% saying that being in the water helps them to feel good about themselves. Last, but not least, over two thirds of those surveyed felt that swimming can have a positive mental impact with 70% agreeing that it helps them to feel mentally refreshed.

One of the most important muscles in your body is your heart. Aerobic exercises have been proven to combat the body’s inflammatory response that leads to heart disease. When you exercise aerobically, your lungs increase in size, capacity and efficiency. Swimming is a great aerobic exercise to help improve your overall respiratory fitness level and fight heart disease. 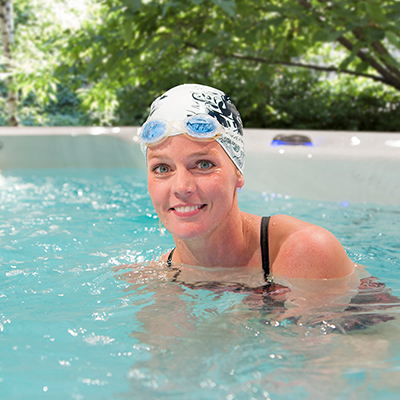 Swimming can help balance your good and bad cholesterol levels in your blood. The thin layers of cells that line your arteries have an easier time remaining flexible when you do aerobic exercises and particularly when you swim. People in their sixties who work out or participate in aerobic exercise have artery functions that are similar to those in their thirties. Arteries expand and contract as you swim which keeps them healthy and fit.

The aerobic power of swimming will raise your good cholesterol levels (HDL) and reduce the levels of bad cholesterol (LDL). For every one percent increase in HDL, the risk of heart disease drops by 3.5 percent.

5. Lower the Risk of Diabetes

Diabetes is an ever growing disease epidemic. Everybody knows that nothing works better for relieving diabetic symptoms and the actual disease than aerobic exercise. By burning only 500 calories a week, men reduce diabetes risk by 6%. Only thirty minutes of swimming the breaststroke three times a week would burn up to 900 calories. This level of exercise could reduce type 2 diabetes risk by over 10%. Women could reduce their risk by over 15% with the same aerobic swimming program.

If you already are experiencing type 1 or 2 diabetes, swim to increase insulin sensitivity. The American Diabetes Association urges every diabetic to get at least 150 minutes per week of moderate physical activity to augment glycemic control. 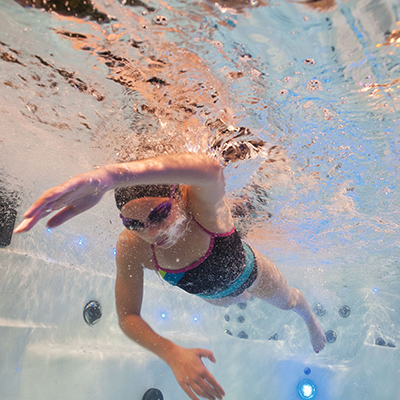 The Amateur Swimming Association4 (ASA) is the national governing body for all things swimming. It published a report that looked at health and fitness research from around the globe. The evidence shows swimming may help increase your life expectancy and save your life.

The report called, “Swimming, taking the plunge for a fitter lifestyle,” highlights how swimming cuts men’s risk of dying early by about 50% compared to runners, walkers and those who don’t do any activities.

It found regular swimming is also great for both sexes because it is likely to reduce heart disease, stroke, and type-2 diabetes by about 535 cases in 100,000 people.

The ASA’s report isn’t the only report that found that swimming cut men’s risk of dying. A University of South Carolina study performed by Dr. Steven Blair1 evaluated physical exams and behavioral surveys from thousands of people who were enrolled in the Aerobics Center Study over the past 32 years. The study was published in the International Journal of Aquatic Research and Education. “Swimmers had the lowest death rate,” said Blair. “This is the first report that examined mortality rates among swimmers in comparison with other types of physical activity and sedentary lifestyle. The study concluded that men who swam for exercise had better survival rates than their sedentary peers.” The study took into account age, body mass index, smoking, alcohol intake, hypertension, other medical factors and family history. “These lower rates of death in swimmers compared with walkers and sedentary men might well be expected, but it is surprising that we also observed lower mortality in swimmers than in runners,” he said. “Swimming appears to be a healthful alternative to other types of physical activity.” Blair also said, “There is no compelling reason to assume that the benefits of swimming would be different for women or for men. In an earlier study in this same population, we found that both women and men had similar benefits from swimming in terms of fitness and other health indicators.”

While many of the benefits we’ve talked about are internal and not something you’ll necessarily feel, the following benefits are noticeable externally and are something that will make a difference in your everyday life.

Swimming can burn quite a few calories. If you are on the heavy side, your adipose tissue makes you even more buoyant in the water. This extra support can make you more comfortable swimming than doing any other sort of land-based exercise. As you get more comfortable and efficient in the water you can increase your intensity to help lose those extra pounds. It is difficult to determine the number of calories you burn when swimming; this depends on your own body type and the intensity you swim. The average calorie burning is anywhere from 500-650 per hour.

A 2006 study researched whether water exercises were as effective as land-based exercises for fat reduction and weight loss in obese women. This study, published in The Journal of Sports Medicine and Physical Fitness,5 found that there were no differences between water and land-based groups on weight loss as long as similar intensities, durations and frequencies were used. 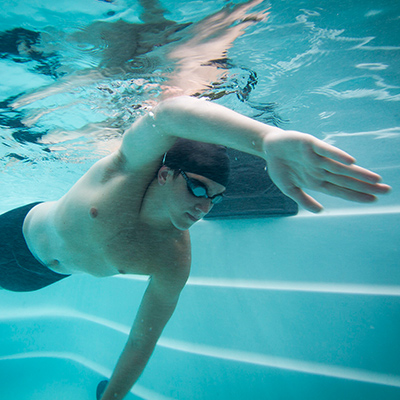 Swimming works most muscles in the body in a variety of ways with every stroke. When strokes are performed correctly, your muscles lengthen and increase in flexibility. The repetition of strokes improves muscle endurance; and because water creates 10x more resistance against the body than air does in land exercise, the muscles are strengthened and toned.

Swimming also enhances core strength, which is important to overall health and stability in everyday life. The hip, back, and abdominal muscles are crucial to moving through the water effectively and efficiently. Swimming builds these core muscles better than most exercise programs.

Swimming gives your body a significant amount of flexibility by providing a wide range of motion around your joints and ligaments. Your arms move in full motions as your hip muscles are engaged to move your leg through the water. You also twist your head and spine from side to side as you swim. With every stroke, you are reaching forward and lengthening your body. This body length makes your muscles more efficient in the water and gives a good stretch from your head down to your toes. 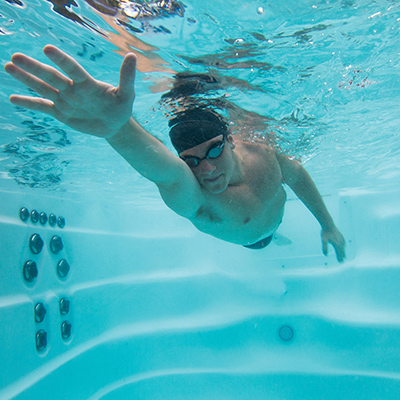 Getting It Done Together

Just like land-based exercise programs, people are turning to independent aquatic exercise and therapy and are looking for credible in-home exercise protocols. That’s where we come in.

Dr. McAvoy has developed exercise programs exclusively designed for Master Spas to help you get the most out of your swim spa and give you step-by-step activities with the H2Xercise book that will specifically help you reach your goals to a better quality of life. We include the H2Xercise book with each swim spa, along with the H2Xercise System which includes a rowing kit and resistance bands to maximize your exercise and fitness results.